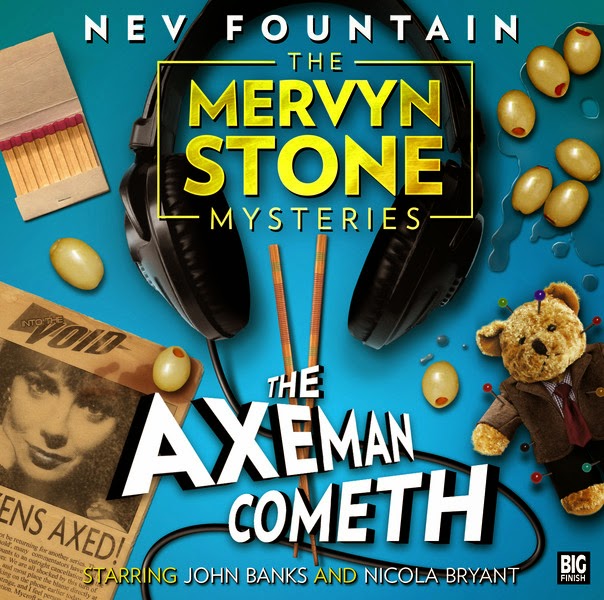 
For those who enjoy a comedy murder mystery, but are not familiar with The Mervyn Stone Mysteries, then I suggest catching up on the trilogy of novels by Nev Fountain.

Mervyn Stone, former script editor and writer of the cancelled 1980s, sexy sci-fi TV series - Vixens from the Void, becomes an unwitting sleuth in these stories. I became very fond of this downtrodden character and hope you do too.

The Axeman Cometh begins with a letter:
"Dear Mervyn. If you want to prevent a murder, then you must attend the recording at the Sounderama studios on Thursday. Signed: a friend."

It was always interesting to see how The Mervyn Stone Mysteries would translate to this Big Finish audio. At around an hour in length, this new story works extremely well. Mainly set in a fan inspired audio studio – comparisons or illusions to real-life characters, places and situations abound. Mervyn Stone (John Banks) and Vanity Mycroft (Nicola Bryant) come to life in this tale of resentment, recrimination and murder. As with the novels, it’s fun trying to figure out the culprit between the deadpan comedy and Nev Fountain has been very clever here by adding a twist upon a twist in the conclusion.

John Banks and Nicola Bryant show an impressive range in playing out various characters and I must admit that the young Doctor Who fanboy in me had a cheeky grin listening to Nicola using mild bad language in a vivacious, spot-on Vanity Mycroft. The cast appear to have enjoyed this recording and it shows, it’s a fine addition to this series. 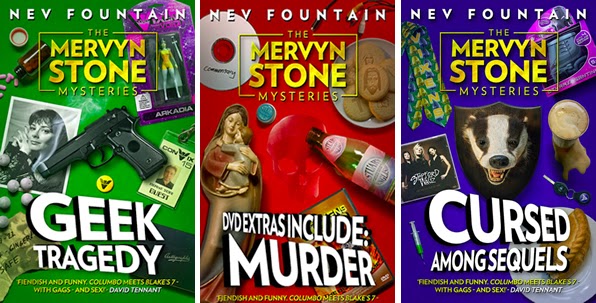 Book Review: Behind the Sofa 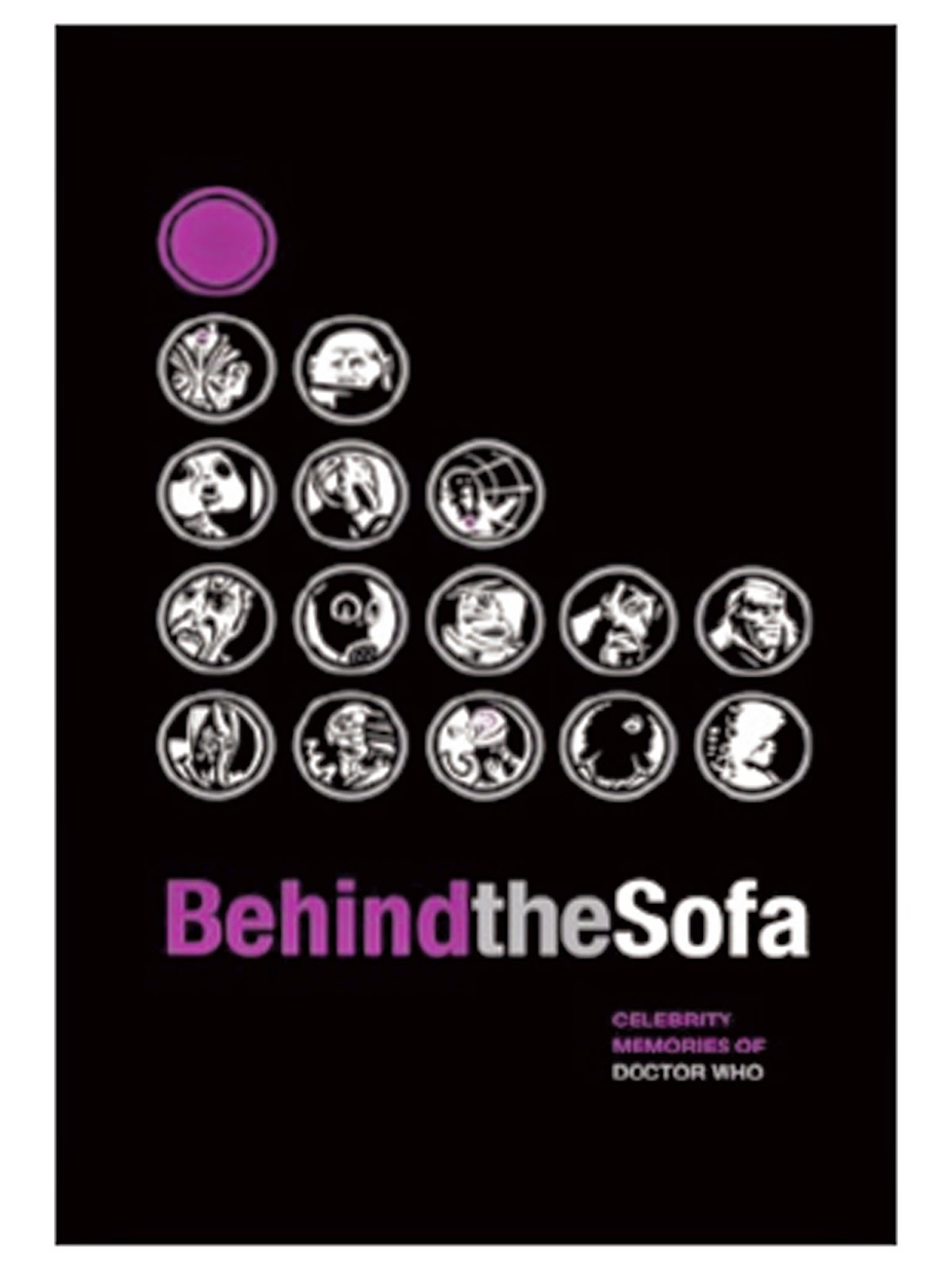 Behind the Sofa
© Steve Berry

It takes a determined person to devote four years compiling a book, in which all of the royalties, proceeds and net profit will be donated to Alzheimer's Research UK. Steve Berry is such a person and in meeting, albeit briefly, at a small convention it’s easy to see how this most affable chap managed to convince more than 100 celebrities to provide their own recollection of Doctor Who.

With so many contributors, there’s bound to be some repetition and a common thread begins to emerge, especially from those whose memories came from a childhood fascination with the show: The now defunct Blackpool Exhibition, which I attended, screamed through, was rushed out off, then wanted to go through the whole experience again. That holiday induced missed episode, long before recording and catch-up, and scrambled memories of nightmarish moments, once seen - never forgotten.

There are some real gems in here: Chris Tarrant’s recollection of a madcap Sylvester McCoy, Katy Manning’s footloose painting session with Jon Pertwee and Clayton Hickman’s account of a down to earth Elisabeth Sladen.  Most, if not all of the writers, actors and production staff who have worked on Doctor Who and contributed here share some nugget of interest from the show. Even those that don’t reveal any hidden secrets have some lovely stories to tell, Chris Chibnall’s being a particular favourite of mine.

For all the obstacles that needed to be overcome, and there were some, Steve Berry and his small team should be rightly proud of this book. A special mention goes to Ben Morris; previous illustrator for the ‘Production Notes’ section of Doctor Who Magazine, whose notable illustrations throughout this book really provide the finishing touch.

Not only a worthy cause, any Doctor Who fan would be happy to have this book on their shelf… 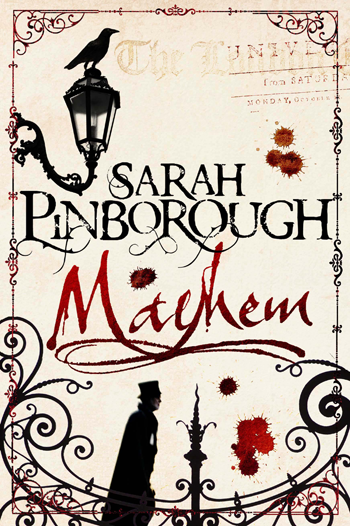 A dark presence has descended over London in the late 1800’s and it isn’t just the smog. Told primarily through Dr. Thomas Bond – Police Surgeon, the novel is set against the backdrop of the paranoia and mayhem instilled by Jack the Ripper. However, the ‘Ripper’ case is merely a symptom of the equally disturbing but lesser known events of the Torso murders (1887 – 1889).

It is these horrendous crimes and some of the actual people involved in the case(s), such as Inspector Moore and Dr. Bond, in which this story concentrates. Having read some Historical Fiction before, I’ve found them to be rather staid. Mayhem however, works with an obviously well researched historical foundation together with Ms. Pinborough's own unique supernatural twist on events, bringing real characters to life through the story’s own internal narrative.

While Dr. Bond is the reader’s identification figure, the story progresses through the tales of various characters. Told in first and third person, sometimes jumping back in time - places, and interspersed with newspaper articles of the day, the structure is such that it works amazingly well. As each chapter ends, a character's story is briefly snatched away from the reader, only to be revisited later. It left me in constant anticipation, even though the killer is revealed well before the end – a brave decision. A decision that cranks up the anticipation levels through to its conclusion. For this isn’t so much a ‘whodunnit’, as a ‘howthehellwegonnadealwithit’.

Not only is Mayhem a cracking read, I later wanted to learn more about these actual events, overshadowed as they are by the Ripper Murders. And such is the suffocating atmosphere of Victorian London that pervades this novel and the interesting struggle of Dr. Bond’s drug induced double-life, the second novel, Murder, can’t come soon enough.
Posted by roblast at 20:15 No comments:


My grandfather handed over two, reel-to-reel, audiotapes, and for the digital generation, I suggest just laughing until your head explodes at this bygone method of recording. For fifteen or more years I’d kept these reels in safe storage, their secrets hidden until the means of unravelling their contents became available. Last week they did, freshly converted onto shinny CDs. For me, this was like unearthing Tutankhamun’s treasures.

‘Maybe nowt, but thi Mam cud be on theer’. Grandfather was Welsh; I guess that’s how Welsh people living in Lancashire spoke back then.

He had a penchant for recording everyday conversations within a household of five children, with Grandmother keeping a steely grip on family proceedings. I’d been privy to similar recordings years ago via the magic of a cassette tape deck; for even younger readers, check out 'Bully's Prize Board' on Bullseye to see what you could’ve won; scrap that, you’ll just Google it anyway. What I always heard was a family without the distractions of the modern world; the Internet, game stations, digital music and mobile phones that keep us near, yet splintered. This was a family actually talking to one another, reminiscing, gossiping, laughing, and enjoying the simplicity of blood-tied social interaction.

These reel-to reel tapes held more than just nostalgia though. They were windows into a past era, a segment of understanding the person who’d carried me, fragmented memories coalescing to form a previously unknown personality. The clarity of audio isn’t brilliant, but listening over and over again, I can piece together the conversations.

Mother sounds different, not like I remembered; childlike, and then it becomes clear from the snippets of comments, together with dating the songs playing from the radio. This is the voice of a teenager, an eighteen-year-old young woman. I’m also there, but can’t be heard, it would be another month or two before I arrived, screaming, demanding and dependant – I haven’t changed.

I was ten when my mother died, she was just twenty-eight. Relatively, I’m now older than my mother, which makes for some time-bending mental mirage. A life lived, yet a future ripped away - a void, which still continues to drain energy from those left behind to this day. An eternity of could’ve been and never-where, carried along in a muse of possibilities.

Some years ago, I’d heard about a cine-film; Bullseye? Google? Take your pick! Filmed months before she died, it was tracked down and converted to DVD; and there she was, all raven-haired and smiling, just as I’d remembered. Unlike photographs, the ten minute, moving, talking picture, filmed in familiar surroundings felt so close and vivid that I could almost reach in and touch her.

The audio reels however, came as quite a shock - I hadn’t recognised my own mother’s voice. The ghosts of the past had offered up a curious voyeurism; a time before my time. This was the voice of a singing, laughing, full of life (literally) young woman, who would soon share in the playful fun with her appreciative sons. Reminisces by family members could now actually be heard, played out in a full hour of recording, courtesy of my late, wonderful grandfather.

He had provided me with my own Howard Carter moment...Treasures, that previously could only have been imagined. 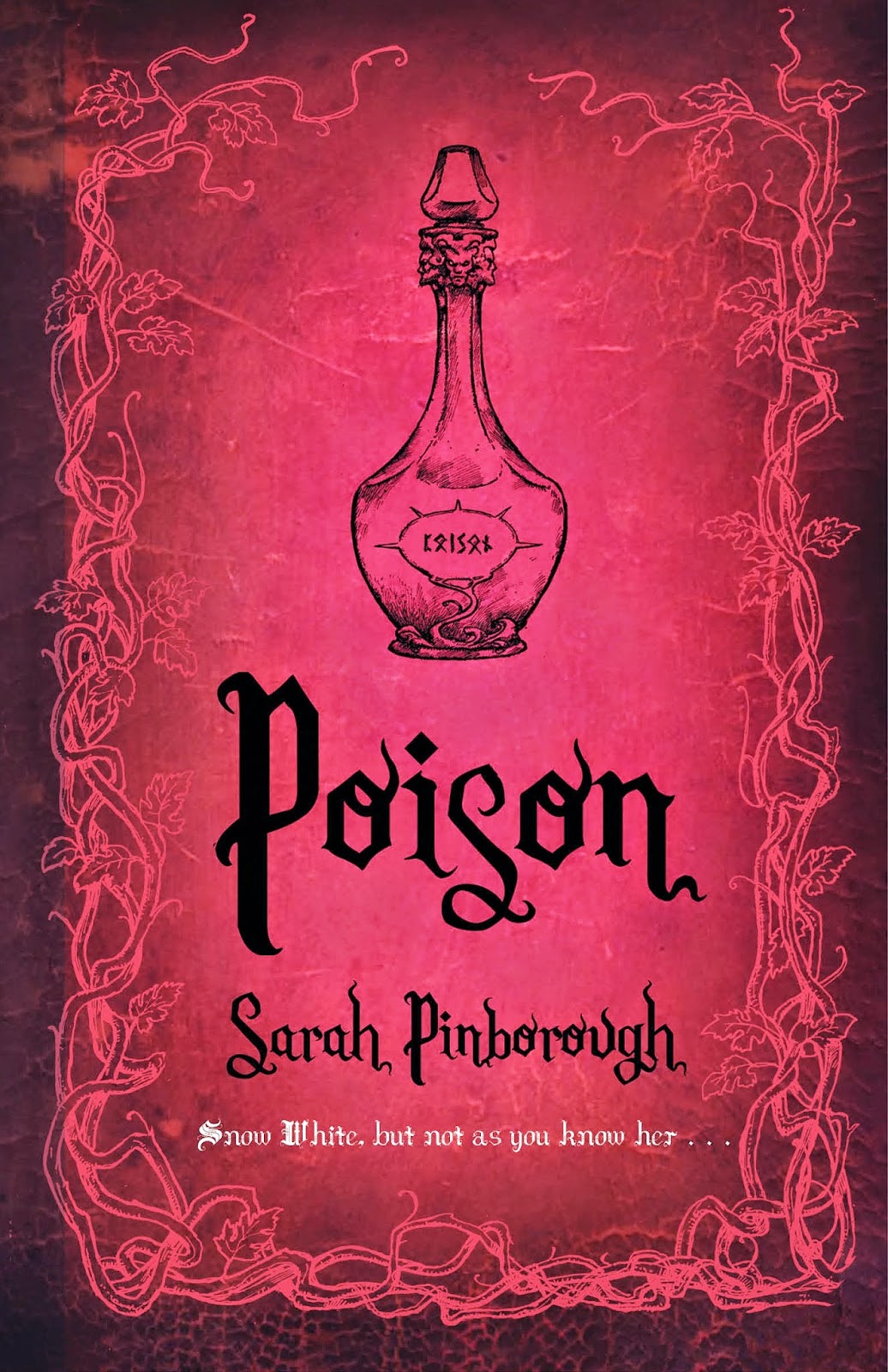 Most books I’ve happened upon have been noticed with an eye-catching cover and intriguing blurb. Sarah Pinborough was the first author who inadvertently led me to her work via twitter. For the life of me, I cannot remember when or how. It’s as if Ms Pinborough crept up behind me and shouted Boo!!!

Entertaining tweets led me to her blog, with a writing style smoother than chocolate melting in the mouth; I was hooked. And so this is my review of the recently released novel ‘Poison’, the first of a thematic, yet standalone trilogy.

Disney’s ‘Snow White and the Seven Dwarfs’, is so entrenched in the memory that it’s almost become the definitive version of this fairytale. Sarah Pinborough has stripped away the layered years of convention and built an adult story from the foundation of the Brothers Grimm tale(s).

There are no clichés here. The Queen’s wickedness is fleshed out from a character so rich in depth as to feel sympathy on occasion. The dwarfs daily life and characteristics read like real working people in this fantasyland; altruistic in their relationship with Snow White.

Along came a handsome Prince: I’ve always found something creepy in the notion of pinning over an unknown, inanimate princess for her beauty alone. It’s an idealised image of a woman in a glass case, re-animated into a person compliant and as pure as her skin. The twist near the end is disturbing as this situation unfolds.

Snow White herself is indeed beautiful, loyal and can drink and be merry with the best of them. This is a contemporary Snow White; fiercely independent and comfortable with her own sexuality. There’s a very sensual scene in this book that not only feels naturalistic but also serves to further character behaviour and motive.

Wonderfully written and interwoven with recognisable characters, it’s a fresh take on this fairytale with strong female characters battling against their environment. At 200 pages, no word has been wasted in this wickedly sinister tale.

I’d recommend the HB if possible as the publisher, Gollancz, have provided much care, with beautiful illustrations by Les Edwards, and a shimmering cover that an image cannot convey. Confidently written: Poison shows an author right at the top of their profession. Now where's that chocolate?!

roblast
Walks the cobbled streets of Lancashire with a flat cap and whippets. Always on the lookout for a blue box and partial to a pint of Tetley's tea while waiting. Grammatical errors are all my own work.